Kinky Vanilla Romance is pleased to share Last of the Red Hot Cowboys by Tina Leonard. I can almost feel the heat coming off of this cover. Here's looking at you, Trace Carter! 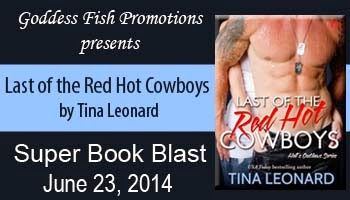 Last of the Red Hot Cowboys by Tina Leonard

This post is part of a virtual book tour organized by Goddess Fish Promotions. Tina will be awarding a $25 Amazon GC to three randomly drawn commenters during the tour. Click on the tour banner to see the other stops on the tour. Remember, the more you comment, the better your chances to win. 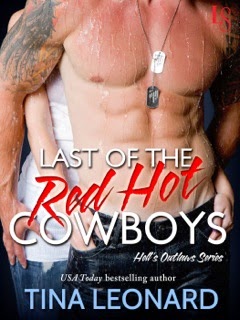 A sexy cowgirl gives a rugged Texas loner the ride of his life in USA Today bestselling author Tina Leonard’s seductive new series. Ava Buchanan dreams of a career on the rodeo circuit. Winning a spot on a one-of-a-kind team would be her ticket to the life she’s always wanted. Ava won’t let anyone stand in her way—not even a stubborn cowboy whose slow-molasses smile and red-hot swagger set her senses aflame . . . and whose talents as a trainer could make her a star. Rodeo might be a man’s game, but Ava knows the right woman’s touch can tame the wildest heart. Trace Carter believes his mayor’s plan to raise the town’s profile has disaster written all over it, and he won’t allow the Hell’s Outlaws Training Center to be dragged into the fiasco. Yet watching Ava’s delectable body on horseback proves too much of a temptation, and his fantasies stray to her riding skills outside the arena. Soon Trace is fighting like hell to rein in his unbridled desire for the petite brunette before it becomes a passion hotter than the Texas sun.

“It doesn’t matter,” Trace said, glancing over at Ava. “Don’t let the Horsemen guilt you. They’re working an angle, and it’s always a crooked one.”

“That makes no sense.” Ava gave him a look of disgust, which he intercepted with good humor. He was just happy to have her in his truck. Frankly, she’d come with him more easily than he’d thought she would. Especially after he’d overheard Fallon ask her out.

That alone had caused Trace to shift his gears. He hadn’t really planned on dragging Ava off. The plan had been to talk rationally to her, help her put her horse in the barn. Hell, he hadn’t had a plan.

“It makes sense to me. You don’t want to hang out with them, Ava. Trust me.”

“I don’t know if I trust you at all. You seem shadier than they do.”

He shook his head. “Just some friendly advice. You don’t know the pitfalls of Hell. Friends help each other out.”

He felt her glare and grinned. Such a sweet, sexy body, so much sass. “Last I checked, yes.

“You need to sell your idea to Judy. Not me.”

“You let me handle Judy.”

“Fine.” She waved her hand dismissively

Ava looked at him, her dark-green eyes gazing at him curiously. “You’re arrogant and short-tempered. You didn’t want to give us a shot in the first place, and this is the second time you’ve put me in your truck to twist my arm. Did I miss what I’m supposed to like?”

“Now that you put it like that, I realize I haven’t given you much to be impressed with at all. Let me fix this snag.”

“Yeah, but when I get done with you, you’ll be a badass helluva rider.”

“Why? Why are you suddenly so motivated?”

He laughed, parked the truck. “Maybe I hate to see a nice girl getting taken advantage of by the Horsemen.”

“I’m not being taken advantage of."

“I meant Judy.” He grinned, enjoying himself.

“It doesn’t matter. You’re not that kind of guy.”

“Unselfish? Sure I am.” He went around to open her door.

She slid out of the truck. “Considerate. You’re not considerate enough to try to help us out. Your ego may be involved because you’re competitive. But not considerate or unselfish.”

He grabbed her hand, turned her to face him. She’d been sassing him with those pink lips for a few days now, and a man could only take so much.

He kissed her, long and slow and sweet, taking his time since she didn’t protest. She felt better than he remembered, even in his wildest fantasies, which he’d had plenty of concerning her. He was dying to move his hands to her waist, circle it, palm her sexy fanny. Told himself it was too fast, and too fast never got a man anywhere.

Her lips moved under his, returning his kiss, surprising him. Had she just moved a fraction closer? She seemed to melt against him, surrendering, and Trace’s world spun at all the magical wonder suddenly opening to him.

Somewhere a truck door slammed. Ava gasped, moved away from him. Stared at him, blinking, then silently went to unload her horse.

He followed, helping her unlock the trailer. She unloaded Mack, walking him to the barn.

That was it? He’d given her a kiss to melt the hardest heart, and she was telling him to drop dead? “Hey,” he said, “don’t freak out.”

“Do I look freaked out?” She walked her horse inside the barn, checked that Mack had fresh, cool water and plenty of fresh hay. “This is the face of annoyed.”

That wasn’t a woman’s typical response to his kissing. “I’m sorry. I jumped the gun.”

“You jumped more than the gun, buster.” She put her horse into a stall, checked the hay, filled the water, brushed past him.

He followed her as she sashayed toward her own beat-up blue truck she’d driven from Virginia. “Ava.”

“What?” She moved a mountain of paper and horse stuff from the front seat to the back.

“Can you forget that happened?”

“Easily.” She got in her truck, switched the engine on, rolled down the window. “I already have.”

He jumped back as she peeled away, shredding his gravel drive. Trace grinned.

She might try to forget, but that kiss was going to last him a while.

It had to. He wasn’t touching the lady again—she was going to have to make the next move. 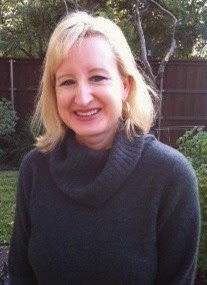 USA Today Bestselling and award-winning author Tina Leonard has sold over 2.6 million copies of her titles. She has made the USA Today Bestseller, Waldenbooks, Bookscan, and Ingrambook lists, and has written and contracted seventy-one books and special projects. Her work has been published by Harlequin, Samhain Publishing, Robinson Scarlet, and most recently Random House Loveswept contracted for a single title trilogy project, Hell’s Outlaws. Leonard was chosen to be among the first authors published for Robinson’s Scarlet line, writing four single title novels for that imprint. Not long after, she sold on proposal to Harlequin American, where she has since written several popular series, most notably the Cowboys By The Dozen, Morgan Men, and Callahan Cowboys series. Her newest single title project, HOTTER THAN TEXAS, was published in March 2013. Leonard is known for her fun sense of humor, endearing communities, snappy dialogue, and memorable characters.

Add Last of the Red Hot Cowboys to your to-be-read list: Goodreads | Shelfari
Posted by From Head To Tale at 2:00 AM