Pivot and Slip by by Lilah Suzanne: Author Interview and Giveaway

Pivot and Slip by Lilah Suzanne


Former Olympic hopeful Jack Douglas traded competitive swimming for professional yoga and never looked back. When handsome pro boxer Felix Montero mistakenly registers for his Yoga for Seniors class, Jack takes an active interest both in Felix’s struggles to manage stress and in his heart, and discovers along the way that he may have healing of his own to do.

Faced with the ghosts of his athletic aspirations, can Jack return to his old dream or carve out a new path, and will their budding romance survive the test of Felix’s next bout in the ring? 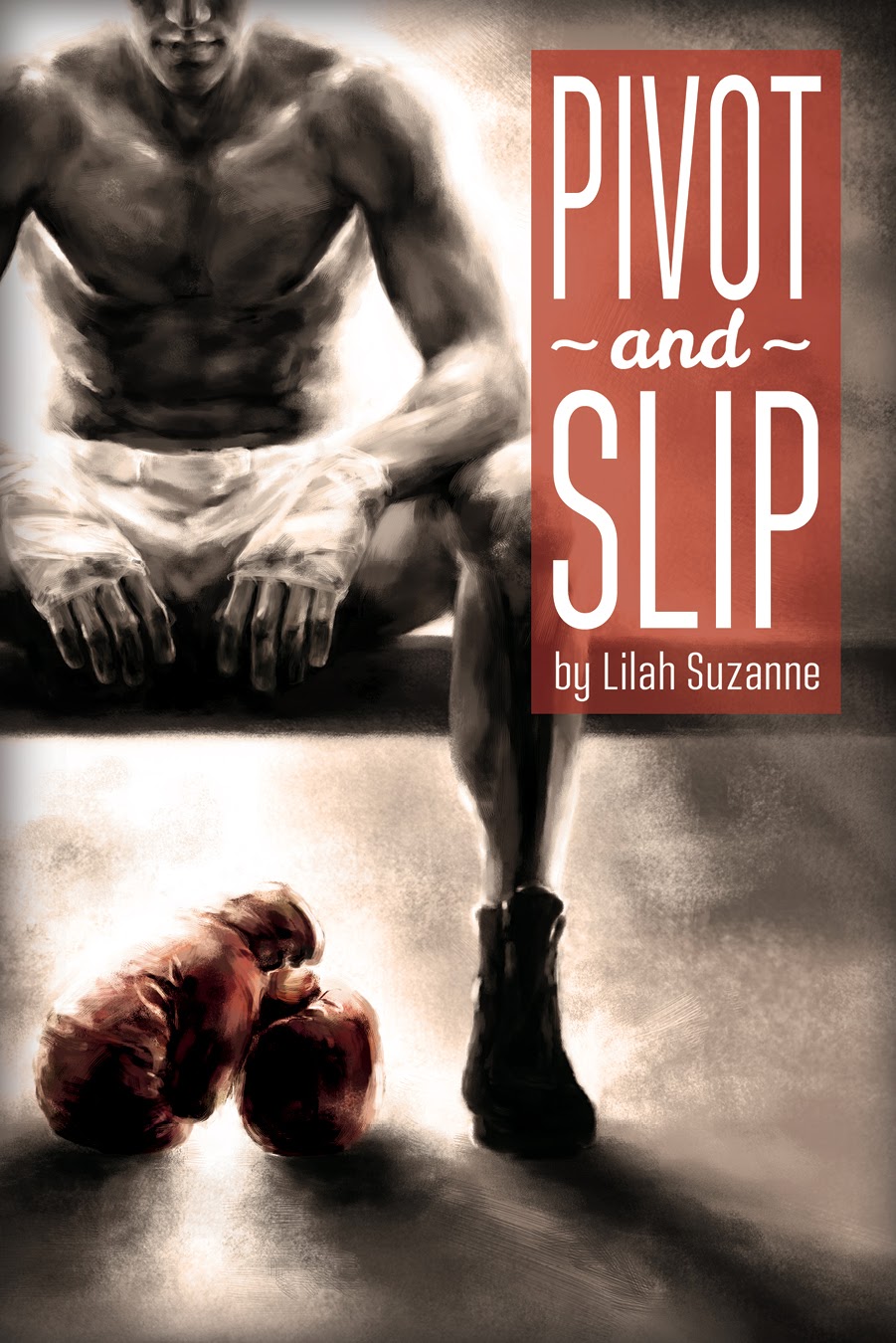 Something flashed across Felix’s eyes, then, and Jack could see his jaw clamp tightly again, working and clenching. His breath came in shallow puffs through his flaring nostrils and he seemed visibly to be trying to calm himself.

Instinctively, Jack grasped Felix’s free hand and stretched it across the distance between them to set it gently against his own abdomen. Jack could feel soft tremors shaking through Felix’s fingers, the vibrations pulsing through Jack’s T-shirt. Felix’s eyes widened as Jack took a deep breath, filling his diaphragm and then his lungs, and let it out steadily.

“Breathe,” he instructed, and inhaled again, nodding when Felix started to follow along. They breathed together, a slow circuit in and out and in, and Jack could see how Felix seemed to be calming bit by bit with every exhalation, his shoulders and neck loosening, his hand going lax and stretching wide across Jack’s stomach from the bottom curve of his ribcage down to his belly button.

Jack focused on sending him a calming energy, passing it out from his body into Felix’s, until Felix’s eyes blinked closed and his mouth parted and Jack found himself completely thrown off by the thickness of Felix’s eyelashes and the plump curve of his mouth.

Jack’s breath hitched on an inhalation and Felix startled and opened his eyes, the ice pack falling to the ground with a soft thump. And when his hand flexed over Jack’s stomach and he dropped his gaze to Jack’s lips and back up, his eyes heavy-lidded and dark, the energy hummed and crackled between them.


What came first for Pivot and Slip, the characters or the story itself?

The story came first, but I then wove the story around these characters so I still feel that it’s very character driven.


What was your favorite chapter (or part) of Pivot and Slip to write and why?

There is a scene where Felix goes back to fight again that serves as a huge test for Jack and Felix’s relationship. Not only is it important for their relationship, but also for them as individuals. It came out just the way I was hoping it would, which is always satisfying!


What about your characters surprised you while writing?

Jack is a little high-strung for a yoga instructor! That was unexpected. But it works really well for the story, even if I didn’t plan it that way.


Who would you cast in the roles of Jack and Felix if your book were to be optioned for a movie?


Is there a message in your writing that you want readers to grasp?

The story definitely deals a lot with dreams and failures and how all of us have to deal with these pivotal moments in our lives that can really show us who we are and where we’re going.


What are the most important elements in good romance writing, in your opinion?

I think it’s important to get not only a sense of who these characters are, but also what they need from each other. You want people to root for them separately and as a couple.


What’s your biggest challenge as a writer? How did you overcome it, or how are you working to overcome it?

Just believing that I can! It’s hard to have confidence when it’s just me and a computer sometimes. Particularly when there’s rejection and criticism, and there will be! I wouldn’t say I’ve overcome it, but I do try to focus on putting my head down and moving forward. Just keep going.


Do you prefer to write in silence or with music?

I can’t write with music on, but my house is far from silent!


Is there any particular author or book that influenced you, in any way, either growing up or as an adult?

I really feel like most of what I read and have read influences me in some way. Whether that’s from an author I admire, or even one I don’t particularly care for. There’s always something to learn.


What project are you working on now?

I have a second book coming out early next year, Spice, a romantic comedy about a sex advice columnist who could maybe use a little help with his own love life.

Lilah Suzanne has been writing actively since the sixth grade, when a literary magazine published her essay about an uncle who lost his life to AIDS. A freelance writer, she has also authored a children’s book and has a devoted following in the fan fiction community. lilahsuzanne.com

Lilah Suzanne on the web: lilahsuzanne.com