WORDS THAT BIND by Ash Krafton: Excerpt and Giveaway

Kinky Vanilla Romance is pleased to share Words That Bind by Ash Krafton, a paranormal romance released last month from The Wild Rose Press. This post is part of a virtual book tour organized by Goddess Fish Promotions.

Ash will be awarding a $25 gift card to Amazon or BN as well as a unique handmade book-inspired keychain to a randomly drawn commenter and to a randomly drawn host. Click on the banner to visit other stops on this tour. Follow the tour and comment; the more you comment, the better your chances of winning.

Words That Bind by Ash Krafton 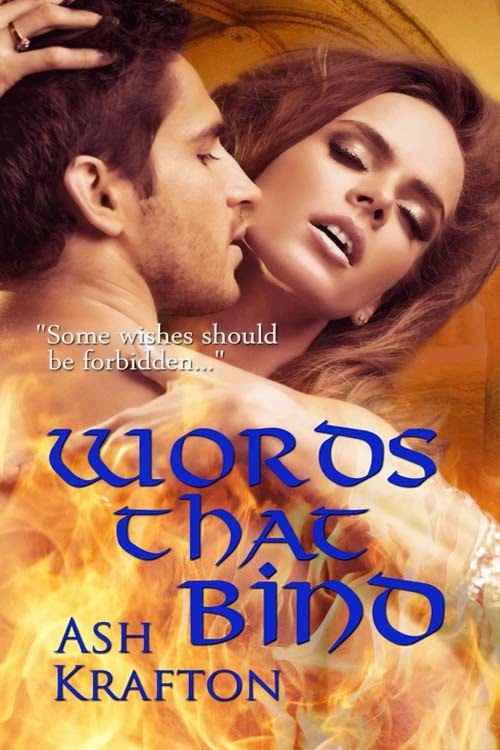 Social worker Tam Kerish can’t keep her cool professionalism when steamy client Mr. Burns kindles a desire for more than a client-therapist relationship—so she drops him. However, they discover she’s the talisman to which Burns, an immortal djinn, has been bound since the days of King Solomon…and that makes it difficult.

Ethical guidelines are unequivocal when it comes to personal relationships with clients. However, the djinn has a thawing effect on the usually non-emotive Tam, who begins to feel true emotion whenever he is near. Tam has to make a difficult choice: to stay on the outside, forever looking in…or to turn her back on her entire world, just for the chance to finally experience what it means to fall in love.

“So. You’ve destroyed a stereotype for me. A genie who lives in a library. Different.”

“When in Rome, no?” He stirred his cup before setting down the spoon with a light clink against the saucer. “Or, I suppose it is more accurate to say when in human form. When I am Burns, I prefer here.”

“Human form.” It didn’t sound right. Who said things like that, and meant it? “Can you change into anything you want? Any shape at all?”

He stretched out his legs and cocked his head, sliding his gaze up and away. “I suppose I could. I’m getting old and set in my ways. There’s this…” He swept his hands down the line of his body.

Her eyes were unable to keep from following, not even when he lingered over his midsection. Even lounging, his shirt was tightly tucked into his beltline. No belly fat there.

He tilted his head and gave her an upper-teeth smile, nibbling gently at his lower lip. “And apparently this form is pleasing to the eye, so I wear it often. But there are others. Tiger, a favorite. Savage and regal and the colors of flames in the night. Fearsome to behold, but very useful when dealing with physical conditions in which a human form may be outmatched. Plus, I can lash my tail.”

His voice took a teasing, conspirator’s tone. “I love my tail. You’d love it too, if you saw it.”

She trained her eyes firmly upon his. No way would she give him the pleasure of checking out his tail.

Ash Krafton is a speculative fiction author from northeastern Pennsylvania. Krafton’s first novel, Bleeding Hearts was published in 2012 as part of an urban fantasy trilogy The Books of the Demimonde (Pink Narcissus Press). An urban fantasy novella, Strangers at the Hell Gate, was published by Wild Rose Press in 2013. Her newest release, Words That Bind, won first place in the HeRA RWA “Show Me the Spark” 2013 competition as well as a Zebulon award in 2014.

Krafton also writes New Adult speculative fiction novels under the pen name AJ Krafton. Upcoming titles include The Heartbeat Thief, Face of the Enemy, and the award-winning Takin’ It Back. She is part of a YA/NA collective known as the Infinite Ink Authors.

In addition to novel-length fiction, Krafton enjoys writing poetry and short prose, some of which earned distinctions in various writing competitions. One of her poems was also nominated for the Pushcart Prize. She’s a proud member of Pennwriters, Romance Writers of America, and Pikes Peak Writers. Krafton also writes for the Query Tracker Blog and the Prose and Cons blog.

She resides with her family in northeast Pennsylvania.


a Rafflecopter giveaway
Posted by From Head To Tale at 2:22 AM