THE MUSE's Nancy Fraser on When Your Research Gives You Goosebumps! (+Giveaway)

The Muse is only $0.99 at Amazon and the publisher's website.

When Your Research Gives You Goosebumps!
by Nancy Fraser


In honor of today’s holiday (my second favorite), I thought I’d share a spine-tingling personal experience.

A number of years ago I was working on a new novel ... a futuristic time travel that began with a visit to a psychic who claimed to be able to transport guests to the future for a 20-second ride and then return them safely home. My heroine, a tenacious Lois Lane-type investigative reporter was sent to debunk her claim. The hero was not only an NYC vice cop, but also the heroine’s ex-husband.

I knew exactly what I wanted to do with my characters...where I wanted them to go, how I wanted them to feel. The part of the story I was struggling with was the mystic part, the séance, the mysterious psychic personality.

A writer friend recommended that I visit her neighbor who, my friend assured me, possessed all the right psychic powers to answer my multitude of questions. So, being the thorough researcher that I like to think I am, I gave the woman a call.

When I made the appointment, I explained I was only there for insight into what a psychic medium does and how I could relate it to my work-in-progress. The woman told me to bring the first chapter of my book in a sealed envelope as well as something else I used when I wrote. My never-empty coffee cup was the first thing that came to mind but, instead, I put a copy of the story on my backup thumb drive and took that as well.

Non-believer that I was, I reluctantly forked over my hard-earned cash and took my seat at the table. Even though I’d only come for information, she insisted I allow her to go through her usual routine. And so...

Handwriting analysis: She had me write out a very simple sentence and then proceeded to delve into my personality based on what I’d written. I was fully expecting she’d hone in on my fiction writing but, rather, she discussed many things non-writing related from my past. Creepy!

Palm reading: Next she read my hand, pointed out my deep and long lifeline (encouraging) and found my writer’s fork! Okay, now we’re getting into what I’d expected. She also said there was a break in my heart line that would become apparent near the upcoming year-end holidays. Given both my mother and my in-laws were elderly, this gave me a moment’s pause.

Tarot cards: Nothing too profound at first. Then, she turned over the card that was supposed to represent the man/love in my life. She said there were wheels around this person. I snickered ... after all, my husband worked for a company that manufactured car wheels. The woman told me to not be so quick to laugh, and that the card had nothing to do with his employment. Strange but not creepy!

Object Association: Finally! We were to the reason I’d come. I handed her the sealed envelope and the thumb drive. She laid them on the table and rested her hands on top. Within minutes, she was giving me details in my book that we’d not discussed...delving accurately into my vivid imagination. She definitely had my attention!

Then, for some strange reason, she began talking about a farmhouse, a small boy with blond hair and a camera. I explained that those weren’t from the book I was working on, but rather from an outline for another book I’d hoped to write someday. She asked if I was thinking of that second book while we talked and I told her “no”, I hadn’t thought of it in weeks.

After we were done and she’d given me some wonderful insight as to how I could play up the psychic’s skills in my book, we opened the envelope and I showed her the first scene she’d described so well. I left the session far less of a skeptic but still not convinced true powers existed. However, I did have a wealth of information I could use while finishing my book and for that I was grateful.

When I got home, I threw the thumb drive in the computer to delete the pages I’d added. When I pulled up the directory, I found not only the pages from for my time travel, but also the proposal for the forgotten story. Goosebumps covered every inch of my arms!

Fast forward three months, the holidays were upon us, and ... my heart line and tarot card readings ... came crashing down around me. My husband of over 25 years decided to call it quits and he’d set the wheels in motion to separate. Everything she’d predicted had come true and I was now a dyed-in-wool believer ... and still am to this day. I’m not saying every psychic is on the up-and-up...I’m not that naive. However, there are people out there with true gifts, whether it be of a psychic nature, or creative nature ... we all have something to give.

The book I’m sharing with you today, The Muse, is my creative outlet … my something to give. I hope that you’ll be enticed by the beautiful cover and blurb and pick one up. If not, that’s okay too.

If you’re going out tonight, with children or without, be safe and have a spookily good time!


The Muse by Nancy Fraser

Privileged Hyde Park socialite, Susan Leland, wants more from life than being a rich man’s daughter. She wants excitement, daring, but most of all, she wants to explore her sexuality. A chance meeting with artist Evan Forrester, a man she’d met purely by ‘accident’ months earlier, leads Susan on a journey of sensual discovery that not only includes the handsome Evan, but also sultry torch singer, Holly Winters. Together, the singer and the artist uncover Susan’s utmost desires and unleash her inner vamp.

Susan tapped lightly on the solid oak door leading to Evan Forrester’s downtown loft. The building was old, in parts dilapidated and smelling of mold. The three-story climb to his studio had been precarious, with more broken stairs than good ones. The urge to turn and flee ran rampant through her thoughts. She still couldn’t believe she was actually taking him up on his suggestion.

She hesitated. She hadn’t pictured him being destitute, a starving artist unable to afford something better than this run-down building. As hard as she tried to ignore her inner voice, she couldn’t hide her concern for the safety of her situation. Eager to be out of the dark, damp hallway, she knuckled the door a bit harder, stopping just short of actually using her balled-up fist to pound the old wood.

From behind the barrier, she could hear the shuffle of footsteps, and held her breath in anticipation. When the door opened, she let her breath out on a sigh of relief.

“You’re here,” Evan said, his gaze flaring as if she’d caught him by surprise.

“You said one o’clock,” Susan reminded him. She made a rather deliberate show of staring at her bare wrist. “It’s five minutes of, according to my watch.” 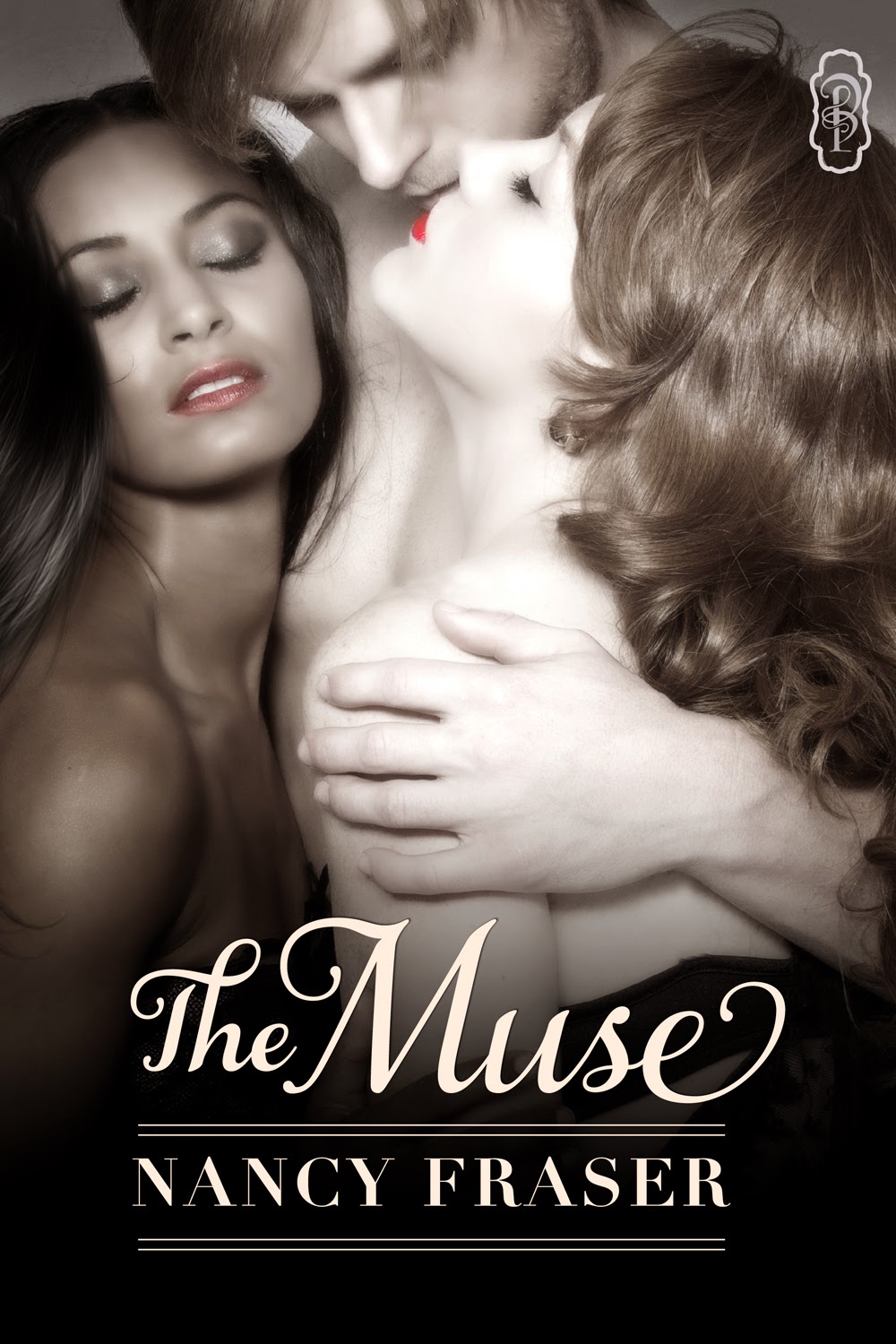 He stepped back and allowed her inside. Unlike the dark entryway and corridors leading to the third floor, his loft was filled with color, vivid splashes of paint adorning walls full of original artwork. Windows rose from floor to ceiling, allowing the early afternoon sun to shine through, unimpeded by draperies of any kind. Sparsely furnished with nothing more than a few chairs and a small kitchen table. Susan wondered what lay behind each of the three doors along the back wall.

“Truthfully, I didn’t think you’d show.” He waved his hand in a circle, the arc encompassing the entire open living area. “I don’t get many Hyde Park society girls in my studio.”

She raised her chin a notch. “Whether you realize it or not, I’m not like most Hyde Park girls.” When he didn’t comment, she reminded him, “You said I could make up for the accident by posing for you. I’m here to make amends for—as you put it—the pain and suffering my recklessness caused.”

He chuckled, the teasing lilt of his voice drawing her attention to where he stood. It was then she realized he was dressed in little more than a pair of tight- fitting denim rousers and an unbuttoned shirt. A sparse patch of short curls adorned his well-muscled chest, trailing downward to disappear inside the waistband of his pants. His feet were bare and his dark hair tousled, as if she’d awoken him from a sound sleep. His second laugh, this one much heartier than the first, told her she’d been caught staring. A sudden wave of heat rushed her cheeks. Her pulse raced.

“As I said last night, I don’t do formal portraits.”

His words drew her gaze back to his face, his mouth, the fullness of his lips. She raised her head and nodded. “Let’s just get this over with, please.”

He crooked his finger and motioned for her to follow. “Bathroom’s through there, if you need the facilities.” He opened the door to the middle room. “This is my bedroom. You can change in here, if you’d like. There’s a dressing gown hanging on the back of the door.”

“Change into what?” she asked. Her throat suddenly as dry as a pile of cotton batting, she slipped out of her lightweight coat and cloche and laid them at the foot of the bed.

Evan shook his head; his eyebrows arched and wagged teasingly. “Into as very little as you’re comfortable with, Miss Leland. I prefer totally nude, but if you’d like to leave your fancy drawers on, I can use my imagination.” He motioned toward the wooden table in the corner of the room. “There are some props, jewelry and the sort, over there, if you’d like to doll yourself up.”

“Anything else?” She did her best to put a sarcastic bent to her question yet feared her voice trembled too much to make the right impression.

He lowered his gaze from her face, across her body, down her legs, settling at last on her ankles. The intensity of his perusal made her toes curl.

“Take off those shoes and put on a pair with ankle straps. Preferably black. There should be a pair in the closet that will fit you.” He turned toward the door, stopping to add, “My studio is in the next room over. I’ll prepare a fresh canvas. Don’t take forever. I have someone coming at three.”

The Muse is only $0.99 at Amazon and Decadent.
Be sure to pick up a copy today!
Amazon | Decadent Publishing

Like most authors, Nancy Fraser began writing at an early age, usually on the walls and with crayons or, heaven forbid, permanent markers. Her love of writing often made her the English teacher’s pet, which, of course, resulted in a whole lot of teasing. Still, it was worth it.

When not writing (which is almost never), Nancy dotes on her five beautiful grandchildren and looks forward to traveling and reading when time permits. Nancy lives in Atlantic Canada where she enjoys the relaxed pace and colorful people.

a Rafflecopter giveaway
Posted by From Head To Tale at 12:30 AM