FROM HEAD TO TALE Presents Just for Show by Jae 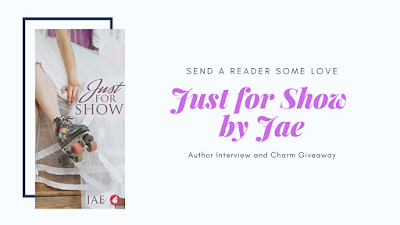 
When Claire, an overachieving psychologist with OCD tendencies, hires Lana, an impulsive, out-of-work actress for a fake relationship, she figures the worst she’ll have to endure are the messes Lana leaves around. It’s only for a few months anyway. And it’s not as if she’ll enjoy all those fake kisses and loving looks. Right?

Click preview to read a sample of this book.

Just For Show is available for purchase in Kindle, audio, and paperback formats at Amazon.com.


Jae is the author of eighteen award-winning lesbian romances. She lives in the sunniest city in Germany, near the French and Swiss borders. She used to work as a psychologist but gave up her day job in 2013 to become a full-time writer and a part-time editor. As far as she’s concerned, it’s the best job in the world.

What inspired you to write this book?

I wanted to write about characters who are total opposites. Claire is an ambitious perfectionist who organizes every little detail of her life and cares to much about what other people think. Lana is spontaneous, messy, and she thinks with her heart, not her head--and she's full-figured, while Claire doesn't eat carbs after six. That was one of my inspirations for "Just for Show" too: The characters in romance novels are often too perfect: perfect jobs, perfect life, perfect looks. No one ever struggles to make ends meet or battles extra pounds--or is completely fine with those extra pounds.


What were the key challenges you faced when writing this book?

The most challenging aspect was probably balancing the many fun scenes with more serious aspects of the story. Since Lana and Claire pretend to be in a relationship while barely knowing each other, they get themselves into many hilarious situations. But both have also more serious backstories--Claire has been dumped by her fiancée shortly before the wedding, and Lana suffers from PTSD after a car accident. Outlining the story before I wrote it helped a lot, and so did my team of beta readers, who read the story as I was writing it and gave feedback that I used to revise the manuscript.


Give us an interesting fun fact or a few about your book.

Throughout the book, Lana keeps wearing T-shirts with fun slogans such as "Abs are great, but have you tried chocolate-chip cookies?" Lana also has four step-fathers since her mother seems to think that getting married is a great hobby.


What do you hope your readers take away from this book?

That sometimes, the perfect partner for you is the person you least expected to be a good fit.


What was the highlight of writing this book?

Definitely the scenes in which Claire and Lana had to pretend to be a couple--their first kiss during an office party was such fun to write. I also enjoyed the gradual realization that while the relationship started out as fake, their feelings no longer were.

What's the strangest thing you have ever had to research online for your book?

I found myself looking at many pictures of tattoos to find one that would fit Lana. The tattoo she has is a phoenix, with wings and long tail feathers inked in all colors of the rainbow, while its head and body glow in hues of red and orange, almost as if it were on fire.


We’ve just started a new year and I’ve seen lots of posts about new years’ resolutions. Do you have anything special that you’ll be focusing on this year?


Who would you recommend your book to and what should readers be aware of (any warnings or disclaimers)?

Anyone who loves fake relationship romances and is open-minded enough to read a romance between two women.


What can we expect from you in the future?

My next book, Not the Marrying Kind, will be a small-town romance between a sexy, pansexual, six-foot baker and a closeted florist. It will be published in June by Ylva Publishing.


Help spread the word about Just for Show and enter for a chance to win a Secret Love Charm (US only, 18+ years, see terms and conditions in giveaway widget). The charm can be used on jewelry, bookmarks, zipper pulls, cell phone charms, etc.

Jae is giving the winner the choice to select the charm color (antique bronze or antique silver). Good luck and thanks for stopping by From Head To Tale.